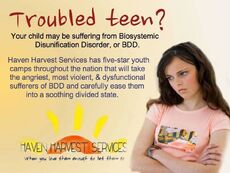 Harvest camps, also called unwinding facilities and the Chop Shop among Unwinds, are licensed clinics or facilities in which Unwinds are prepared for a divided state. While each facility has its own particular personality, they are all designed to provide a positive experience for youth designated for unwinding.

On the existence of a soul, whether unwound or unborn, people are likely to debate for hours on end, but no one questions whether an unwinding facility has a soul, the answer is simple: it does not. Perhaps that's why those who build these massive medical factories try so hard to make them kid-conscious and user-friendly, in a number of ways.

Every single one of them is located in a spectacularly scenic location, perhaps to remind its guests of the big picture, and the reassuring majesty of a larger plan. The grounds are also as well maintained as a resort, filled with bright pastel colors and as little red as possible, since red is psychologically associated with anger, aggression, and, not coincidentally, blood.

Occasionally, in spite of the professional and positive attitude of the staff and the 'pleasing' environment of the camp, outbursts do occur. For example, during Connor and Risa's arrival at the camp, rebellion was in the form of graffiti on the side of the medical clinic that reads, "YOU'RE NOT FOOLING ANYONE."

The average stay for an Unwind is three weeks, although it varies depending on blood type and supply and demand. Much like life in the outside world, no one knows when it's their time. However, there are exceptions. At the Happy Jack Harvest Camp, members of the band, that plays on top of the Chop Shop when kids about to be unwound are being brought in, have extended stays that can last up until the very last few moments before they turn eighteen. Also, tithes can choose the exact day that they are unwound.

Exercise seems to be a principal component of the Unwind's day. It is later revealed that each of the players actions are closely, but subtly, monitored and studied with cameras and the people manning it, taking notes on eyehand coordination, gauging the strengths of various muscle groups.

Tithes are treated differently than the regular population in harvest camps. "Tithes" and "Terribles" are the two distinctions of the Unwinds in camp. Tithes don't participate in the same activities as the terribles. They don't wear the same blue and pink uniforms the terribles wear; instead, they continue to wear their white silk outfits. This arouses feelings of hate from the terribles for the tithes, the way peasants despise royalty.

Retrieved from "https://unwind.fandom.com/wiki/Harvest_camps?oldid=9463"
Community content is available under CC-BY-SA unless otherwise noted.